Clearly, I’m one of those “terrible” people who really likes zoos (Houston Zoo/Yorkshire Wildlife Park) however, I do think they’re great for conservation efforts etc. so let’s not get into the political pros and cons of animals in captivity. If you are like me and enjoy seeing the animals I would definitely recommend the South Lakes Safari Zoo. I went to the zoo probably about 10 years ago, ahead of all of the controversy surrounding the conditions of the zoo and when I saw all of the articles about the closure of the zoo in 2017; it was really disgusting almost 500 animals had died in the space of four years, I was super shocked and disgusted. However, when the Cumbria zoo company took over the zoo it all seemed super positive!

It was Australia Day so the zoo was giving free admission when a £5 donation was given to the Australian Wildlife fundraising efforts following the crazy fires. Understandably, the zoo was super busy at opening, however, I was absolutely elated when we managed to get in and purchase on the day tickets to feed the jaguars. I was so excited. The last time I came to the zoo I fed the giraffes and penguins but thought it might’ve been on elf the things that had been restricted since the new owners took over but nope! They definitely could be charging more for the big cat feeds though; although I was buzzing with my cheap £7.50/person I definitely would’ve and expected to pay more.

We were lucky to get into the park the same time that a birthday party was starting so the giraffes were all up at the fence eating their salad meaning they were super close and you could literally pet them. I do love giraffes, they are so interesting to watch and it’s crazy to me how friendly they are, and their tongues are so funny.

The rhino did look a little bit sad because their field was all muddy with no grass left for them to graze. They shared a field with the zebra and wildebeest too as an African plain. The area was quite big which I was happy about, but I hope in summer it looks more appealing! 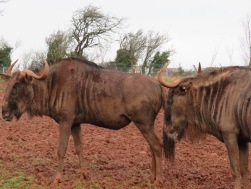 I remembered from my first visit that there was a “petting zoo” style section which had kangaroos and emus in amongst other animals. It was still there and you could buy food to give to them as you go through. I was surprised how friendly the kangaroos were; they literally wanted belly rubs off people. Some of them were carrying joeys too, but were sensibly keeping to themselves. The one thing I didn’t like about this area was that there were signs everywhere saying to stay off the grass which I think is so important as the animals shouldn’t be forced to interact if they don’t want to. However, there were people on the grass walking over to animals and the staff weren’t commenting. Kind of bugged me a bit! 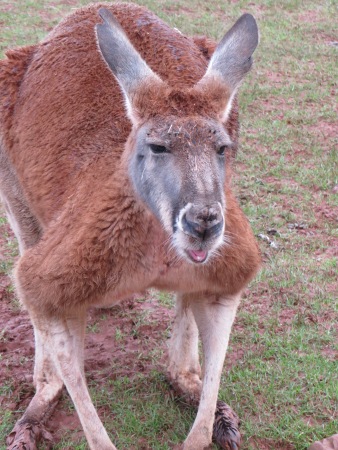 There was a huge enclosure of baboons which are such hilarious animals and always look like they’re up to no good. A big atrium of parrots and possibly other birds; I’m scared of birds so keep out of the way of them. There were also some “piles” of lemurs; that should literally be the official term for a group of lemurs.

You could walk through the penguin enclosure; I think they still let you hand feed them at feeding time, but the penguins had quite a lot of protected area which meant they weren’t actually anywhere near where we were walking. They were actually all quite happily playing in the water. I have to hand it to the South Lakes, it’s probably the least smelly cleanest penguin enclosure I’ve seen!

The big cats are always a big draw to me when I’m at a zoo. We saw the snow leopards and the jaguars quite happily chilling. We managed to spot the tiger hiding at the back of his enclosure which was super cute because it was asleep just like my cat Phoebe at home sleeps!

Obviously, my highlight of the day was feeding the jaguars! I think they cycle through the big cats for which ones get hand fed each day. The jaguars were pretty cool. There are two of them, Bonnita and her son Remi; unfortunately the Dad died a little while ago. We went into the big cat house in small groups; there were three of us in my group, and they gave us tongs with pieces of beef to feed them through the bars of the enclosure. I was really surprised how gently they took the food off the tongs but they absolutely loved it! You could easily be fooled into thinking they weren’t wild animals, but they definitely were. They definitely respected their keeper because a few times they started fighting and he shouted at them to stop and they did. Although I do always think it would obviously be amazing if all of these animals could have bigger enclosures, I think the South Lakes are doing amazing with what they have. Poor Remi had also just been diagnosed with a rare cancer and the keeper was happy to talk to us about their options for treating him and their reasons for doing what they have done. I would genuinely recommend one of these experiences to anybody it was very humbling.

Don’t get me wrong, I’m not cruel but I do love seeing these amazing animals and feel privileged to be able to interact with them. It does seem like it would be a good family day out too. They aren’t bleeding people dry but are making real conservation efforts and supporting animals around the world with the money they raise. They are also part of breeding programmes around the world. It’s a little hidden gem in an area you absolutely wouldn’t expect and only takes a few hours to throughout appreciate.