I have two confessions:

1. This was my first ever ‘proper’ Guy Ritchie film (do we count Aladdin? I’m not sure we would../)

2. I actually thought this film was part of the Kingsmen series when I saw the posters… awkward

I was pretty enamoured by the cast for this film rather than really seeing any trailers for it, but it really took my fancy. And how could it not with a cast consisting of Hugh Grant, Colin Farrell, Matthew McConaughey, Henry Golding and a fellow Geordie?? And I must say, it lived up to the casting; is there anything more disappointing when a film is crap but they’ve cast good people to try and hide it?!?

The Gentlemen is a dark, semi-violent gangster comedy which sees Fletcher (Hugh Grant) recounting the events of how Mickey Pearson (Matthew McConaughey) is trying to sell his marijuana business for £400million to an American businessman called Matthew (Jeremy Strong), he is informing Raymond (Charlie Hunnam); Mickey’s right hand man, of what he knows in order to bribe them for £20million. Of course it isn’t a straight forward business deal but a spiderweb if deceit, violence, guns and humour of course. I actually laughed quite a lot through the film!

Hugh Grant definitely owns the show with genuinely the best character I have seen him play; he is not a middle class, dopey, upper class buffoon for once, but a funny cockney wannabe gangster. He had a lot of funny lines and I was reminded he can actually act!

Colin Farrell also had a great role as the ‘Coach’; a guy who inadvertently causes trouble trying to prevent it. There’s a great scene in a takeaway where Coach challenges a group of young lads who are acting the big guy. He also has some great lines involving a drugged up man and a pig; I’ll let you use your imagination for that one. And who can resist his Irish accent??

I think what I liked about the film; other than the fact it was a genuinely good film, is that it was definitely a masculine film, however, there was only really one female in it and although she did dress sexy, she was her own boss and wasn’t there just for sexual gratification.

Honestly, such a good film! Not one to watch with the family but it is definitely worth a watch.

Oh one more thing! There was some great nods to Guy Ritchie through the film too! Look out for a van and a movie poster as those are the two that I spotted! Let me know if there are anymore too! 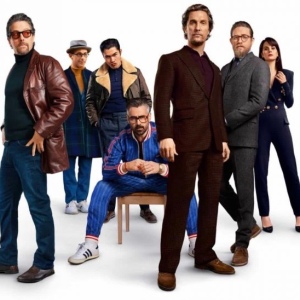