I love me a Hard Rock Cafe and I love a swanky hotel, so Hard Rock Hotels are always tempting! When I saw that Jet2 were doing an All Inclusive option for the Hard Rock Hotel Tenerife I was super tempted, but it was quite expensive. However, when I showed it to my boyfriend the decision was taken out of my hands.

Our room was on the 15th floor which I was very happy about because I love a room with a view. We had paid extra for a “gold” room but I don’t really understand what was different between gold and silver, and we had also paid for a partial sea view which was two little snippets of sea between buildings but it was still pretty. 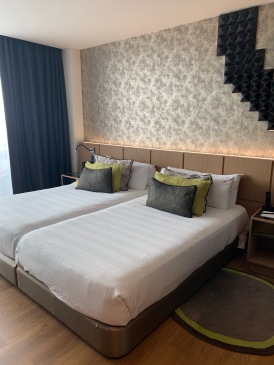 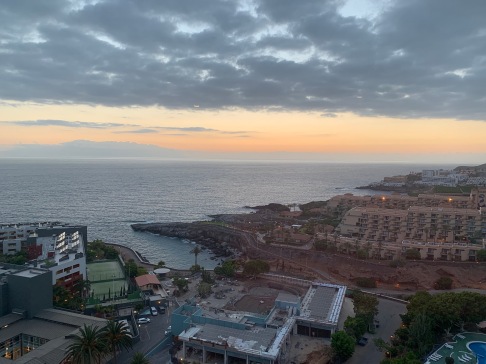 We literally dumped our bags in the room and headed down to the buffet restaurant to get some food. The buffet was really good with a huge range of options; which even at 9.30pm still was fully stocked. The wait staff were amazing too and brought drinks to you; the strawberry daiquiri was always particularly good. Since it was dark we had a quick look around and sat ourselves at the outside bar. The resort was pretty big, there were two pools, two hotel towers and a few different bars. We could also see the lagoon pool across the road but the bridge to it was closed. 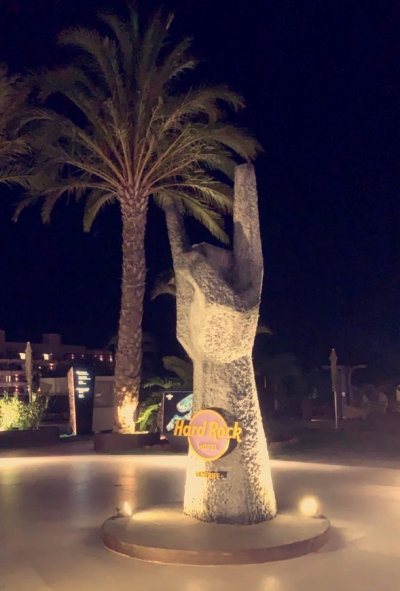 The evening entertainment happened in the foyer and it was pretty loud. There was always a good crowd around the entertainment but it wasn’t you typical all inclusive Spanish hotel with one sweaty room full of people, people tended to be quite spread out and you can still hear the entertainment from the patio area. All of the bar areas were lovely and clean, a nice atmosphere, some twinkly fairy lights overhead; always a winner to me, but the service was a little slow, there wasn’t really enough staff to keep up with the evening demand.

Back in the rooms, the air conditioning was spot on, the shower rooms were a little bit strange to get used to and I’m not sure how I would feel if I was just there with a friend rather than boyfriend as there is no bathroom to get ready in… the TV wouldn’t work for us, every time we turned it on it was super loud and the remote wouldn’t work so we ended up having to get a maintenance man to come and look at it on the second night. But most importantly the beds were really comfortable and the black out curtains were spot on!

Like true Brits we got up early(ish) the next morning out of concern we mightn’t get a good sun bed! We went down for breakfast where there was a huge selection: cooked english breakfast, omelette station, chicken kebab (I don’t know), cereals, yogurts, fruit, continental, toast and so on. Then we headed out to the adults only pool. We were super happy when we found two of the big comfy chairs free and quickly claimed them. 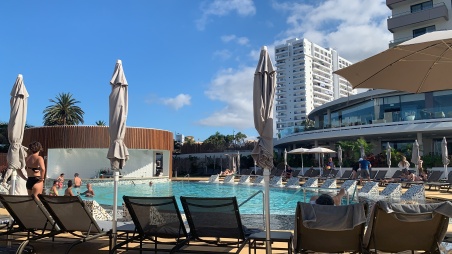 The adults only pool has the big round comfy chairs, regular sun beds, sun beds in the pool, bar stools in the pool, bar stools at the dry bar and restaurant table seating so loads of choices of where to sit. The pool opened at 10am and it got particularly busy at about 9.45am and there were no beds left at all just after 10. Because it was adult only there was a nice chilled vibe around the pool and it wasn’t too loud; just the hard rock music playing through the day. I was surprised how few people actually drank in the pool too; I’m not sure if that was because not many people were all inclusive but it was strange to me.

Our first day around the pool was particularly quiet as there was a pool party on down at the lagoon pool. We had actually seen before we went that there was a pool party on and had considered booking tickets. I’m glad we didn’t as we got free entry as hotel guests anyway. It looked really fun with lots of giant inflatables in the pool, foam cannons and DJs; the headliner was Sigma the day we were there. 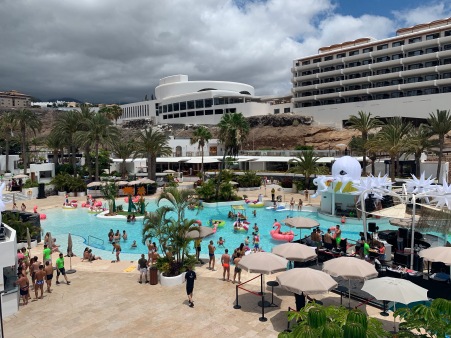 We did wander down but it really wasn’t our scene; I don’t do crowds, nor am I a size 6 looking like a celebrity in my bikini and my boyfriend definitely isn’t in to music that needs a DJ haha. We stopped in the restaurant down there for some lunch though and ended up sat next to some big spanish DJ who was playing called Wally Lopez.

All of the restaurants you can eat at for lunch on the all inclusive as just abridged menus from the pool bars. I didn’t really find there was too much choice but at the Beach Club was pretty limited for me, I ended up ordering the pesto pasta which was pretty bland, but the free bread they gave you was yummy! Haha. On our second day we ate at the bar attached to the adults only pool and the food really wasn’t good. So if you’re all inclusive I recommend going around to the family pool as the food there was really good! They served, pizzas, hot dogs, burgers, salads and chips. Super good!

Almost all of the reviews I ready for the hotel before going said that you had to go and watch the sunset from the Sixteenth which is the hotel’s rooftop bar. I must say you do get a pretty good view of the sunset… 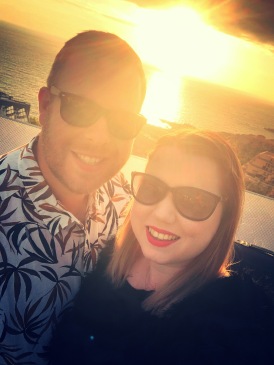 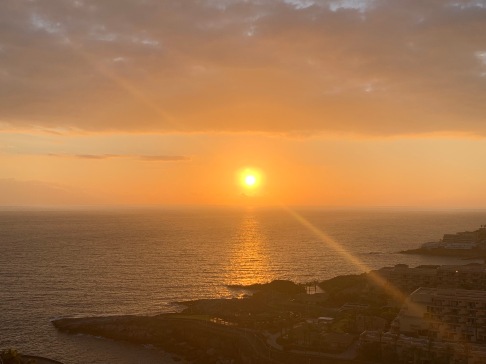 The Sixteenth isn’t included in the All Inclusive option and you also can’t use your free €30/day towards your drinks (if it’s applicable to you), however, the drinks were actually really nice up there as they did some drinks you couldn’t get at the other hotel bars. The first night we went up it was “reggae” night and there was a girl singing, although they were pretty much pop songs with a reggae twist rather than reggae songs. She was actually really good and I felt that she finished a little bit too early, but never mind. 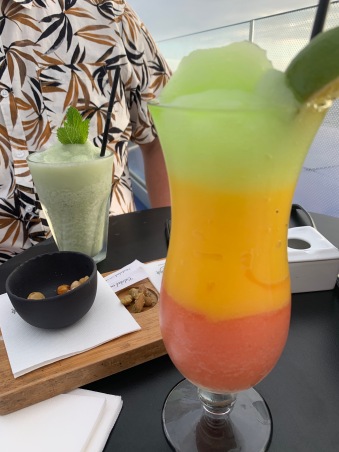 As we had booked an all inclusive holiday through Jet2 we also got one free access to the hotel’s spa each. Wowza! It was nice. Reception in the hotel had advised us we didn’t need to book, but the slightly frosty reception we got at the spa suggested they would have rather we had, therefore, I was expecting it to be quite busy inside, but it was super quiet; which worked out great for us. We were in the spa for about 2 hours and the whole time there were only two other couples there. The spa is made up of two hydro-pools, one cold plunge pool, a steam room, sauna, SNOW room and an outside pool space with heated stone loungers, regular loungers, different jets inside the pool and super cool loungers in the pool which massaged you with jets of water. It was honestly really nice and relaxing. It was lovely to have it for free and we probably wouldn’t have ever went in if it wasn’t free but we would’ve definitely been missing out! What I realised in the changing rooms was that there are different daily offers on which it would be worth investigating before a stay to see if you wanted to utilise any of them.

I was really quite happy to stick around the hotel it felt like there were plenty of options of things to do; especially as we were only there for four nights. We had one day out but still felt that we could’ve stayed longer. What I would say is that Playa Paraiso is definitely not Playa Las Americas, it is quite a small and quiet resort and was cloudy a lot of the time; although still very warm. We went for a walk down to the sea front and although there were a couple of people on the little beach it wasn’t a touristy beach really. It did look as if the area is being developed though and extra things getting added. I also found it really strange that the hotel didn’t have an actual Hard Rock Cafe it as in Playa Las Americas. Luckily, Playa Las Americas is pretty close so if you want a good night out or shopping etc. you can get it. There was also good deals on hire cars from the reception. If you want some cool luxury though I’d definitely recommend it. We are already talking about going back in 7 years for my boyfriends 40th haha! 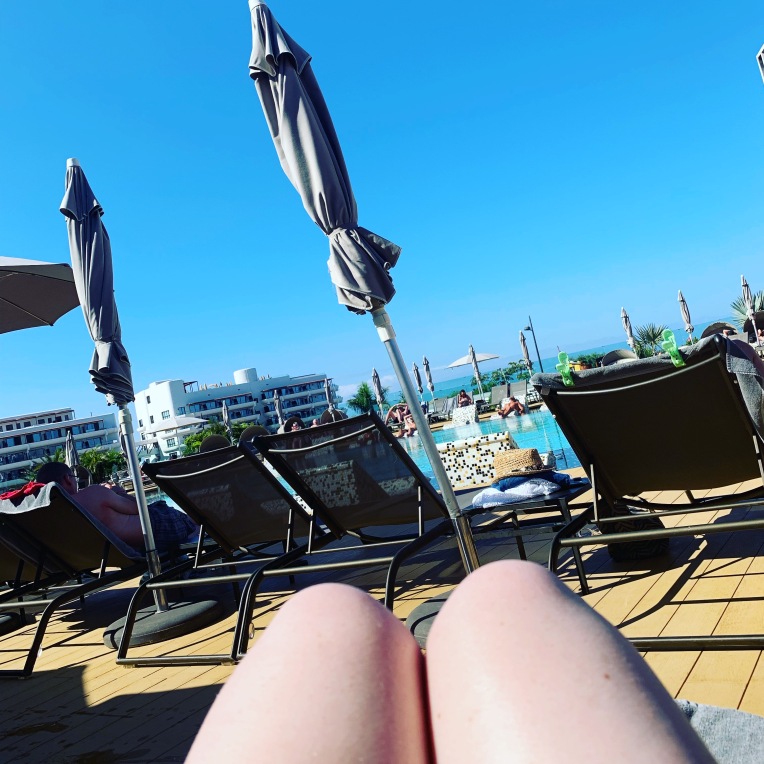 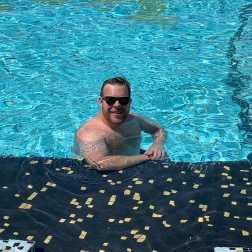 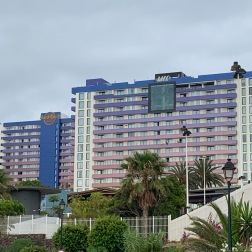 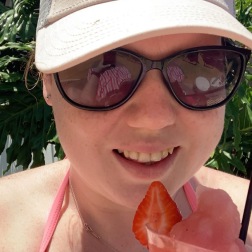