Me and my friend Sara wanted to do something fun this Good Friday which didn’t include spending a fortune on alcohol or standing in stupid queues at the fair, so we decided to give Beamish Wild a go! We had both done Go Ape before and loved it so thought we would try to the local version: Beamish Wild is on the grounds of Beamish Hall in County Durham.

When we first turned up I was worried that it looked quite small, but actually it goes quite far round the corner that you can’t see; although I don’t think it is as big as Go Ape Matfen which is the one I’ve been to.

The group was pretty mixed; a few couples, a few groups of friends around our age then some younger boys. We totally planned to go at the back so we weren’t holding anybody up, but apparently everybody had the same thought so we just manned up and went near the front. I quite liked the way they got everybody suited and booted into the safety equipment as it was easy step by step and the whole group could follow it; although Sara was definitely the idiot who struggled haha. We then got taken over for a safety briefing on the equipment and how to get ourselves on and off the ropes. They have the standard carribina (how do you spell that?) equipment, but also this really clever device that means you can’t get yourself off one rope without attaching a new one which gave a lot of people in the group some peace of mind. You then had a little practice section where the instructors could check that you knew what you were doing; once again Sara was the issue person haha. 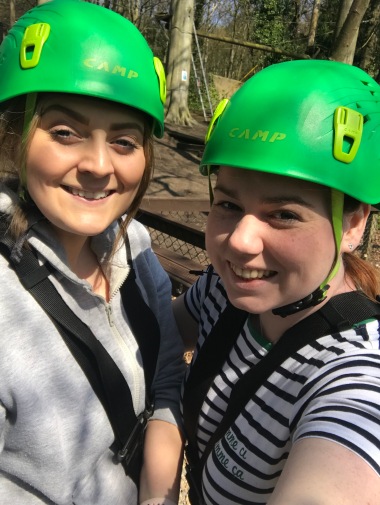 After that we were off!

There was a little course to start with which was the lowest level. I genuinely found the second obstacle the scariest, it was a rope to walk across with hanging ropes to hold on to, I was shaking so much I could barely balance. The instructors all kept saying it was the worst obstacle of the course though which gave me a little more hope. There were 4 or 5 different crossings then a zip wire back to the ground.

It was here that Sara quit and left me alone! Luckily for me the camaraderie between the whole group and the instructors was really good so I managed to struggle on alone. It took me over an hour to get around but I was really proud I only got stuck at one point; I didn’t go far enough on the zip wire and I couldn’t pull myself along so the man had to rescue me. There were four zip wires in total and loads of different types of crossings, including one where you just had to jump; maybe tall people can just step? I don’t know.

The end of the course was a leap of faith straight off the platform. I screamed soooo loud as I jumped off but I once got told that if you scream at least you’re breathing!

It was a lot of fun and I would really recommend it for everybody; unless you’re scared of heights then don’t bother. It would be a great family day out, party or even just something different to do with your friends!

One thought on “Beamish Wild”