Disney’s and Tim Burton’s reimagining of the 1941 classic tale of Dumbo the elephant seemed to creep up on me and be released out of nowhere. I am a huge Disney fan, but although I do own the Dumbo blu-ray, it is not a film I can even really remember. I have seen it at least a couple of times and knew the basic premise of the story and always love animals so knew I didn’t want to miss it, so I dragged my friend Sara along to see it this morning.

Dumbo tells the story of a baby elephant born to Medici’s (Danny DeVito’s) circus with deformed ears. Medici had been pinning all of his financial hopes on the birth of the baby elephant to save the struggling circus and when he is born with overgrown ears he challenges performer and war veteran Holt Farrier (Colin Farrell) to “sort it out”. Farrier begins to train the elephant but it is his children Milly (Nico Parker) and Joe (Finley Hobbins) who discover that when encouraged with a feather, the baby elephant can fly!

Hearing of the elephant’s magical powers V. A Vandevere (Michael Keaton) and his beautiful “Queen” Colette (Eva Green) come to offer Medici and his troop a deal to move into Dreamland amusement part to collaborate. With both Vandevere only interested in making money the collaboration between all parties soon turns sour with disastrous consequences.

Such a brilliant feel good family movie and a lovely real life reimagining of a classic story. All of the cast were brilliant and there was some lovely nods towards the original movie; the steam train, bubble animals etc. there were also stuffed toy versions of Dumbo on sale which massively resembled the cartoon character from the original movie. I thought the computer animation of the elephants was brilliant too; especially the eyes of the mother.

It was a really good family film and although it is a PG I honestly think it’s perfectly suitable for young kids too! Winnie the Pooh’s heffalumps are scarier! 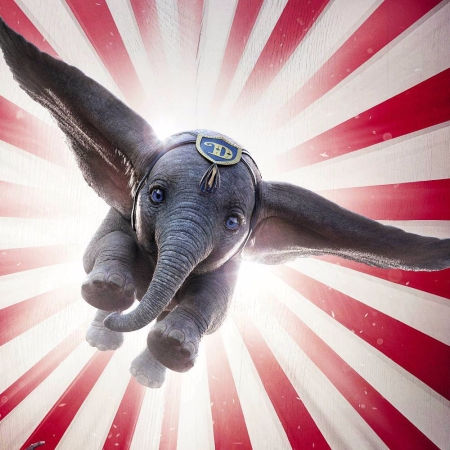