I didn’t even know there was a zoo in Yorkshire other than Flamingo Land until Zoo Week last year, however, when I saw there was a zoo close by that had Polar bears I was eager to go. But it took until this weekend to make it. My friend Sara and I had picked a random weekend to go, but it turned out it was actually an anniversary weekend so we got our tickets for just £10! Even better.

In true British style, Doncaster was forecast to be dry and windy, but not long after we arrived the heavens opened. It really did make it a little dreary and difficult to be happy, but it did dry up and the sun came out after an hour and half or so. One thing I will definitely say for the YWP is that there isn’t as big a variety of animals as some zoos; like Edinburgh, but they actually have a good selection of each animal and little stories attached to them.

Our first stop when we arrived was the meerkats who are in an enclosure just inside the doorway. They were super chill just enjoying the little bit of sunshine before the rain hit.

Then from the meerkats it was on to see Simba; literally, one of the lions is genuinely called Simba. The zoo has eight lions which were all rescued from a struggling zoo in Romania. There is a sign up which tells the story of how the Yorkshire Wildlife Park was a very small zoo that didn’t have the funds to rescue the lions, but with the help of the News of the World Newspaper and Jet 2 they were able to make it happen. The lions are separated into three prides and out of the nine six were out and about. My favourite was a male lion called Adel who had his tail amputated so was easily identified.

After the lions we headed “Into Africa,” unfortunately, the rain had started to come down and most of the animals were in hiding. The rhino wasn’t around, we caught just the ears of the leopard as it went into hiding and the giraffes were hiding indoors. The tigers however, were out facing the weather and looking super cuddly, I genuinely just wanted to curl up with this one.

We headed into the giraffe barn as they were all hiding in doors, but it was pretty small. There were four giraffes but you couldn’t really see the place that they were standing; which I guess is fair enough considering it is their indoor space. We figured we would give them another try later when the rain stopped and we would go and hunt for the camels and brown bears in the meantime. However, they weren’t playing out either! So we gave up and stopped for a hot chocolate. Little tip, the cafe was really expensive and really not worth it so if you’re planning on going take a packed lunch!

The sun came out! Hallelujah! And so did some of the animals. 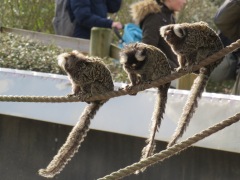 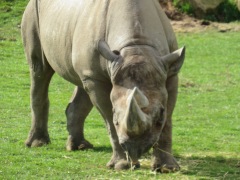 One of the things I was most excited for to visit was the Polar Project. I’ve only ever seen polar bears a few times, years and years ago Flamingo Land had one polar bear that always looked so miserable I was really glad when it was moved (I say that hoping it didn’t die) and in Sea World. It was great to see them in an enclosure that was purpose built but hadn’t attempted to make fake ice and had accepted that they don’t always live in freezing conditions. The polar bears genuinely looked happy, two of them were playing together eating, another was roaming around and lying lazily on the grass whilst the fourth was being kept inside. I’ve read online that the Polar Project is an international research facility and hopefully some good work will come out of it! 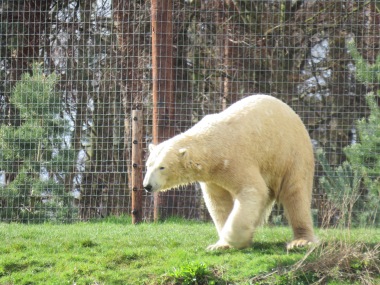 We made our way around the rest of the animals: warthogs, little monkeys I can never remember the name of, anteaters, giant otters and armadillos. Then we headed back to the entrance to find the baboons and painted dogs.

I’m always fooled by the painted dogs because they look so tame and fluffy; bit like how I am with all of the big cats, but people keep telling me how vicious they are. One thing I do think is ironic, they always seem to have such big enclosures and then every time I’ve ever seen then they’ve just been huddled together in their “house” sleeping. Are they maybe nocturnal? I don’t know… 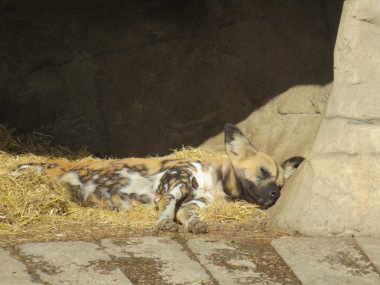 The baboons are always a favourite because they’re just so funny looking! There were quite a few in the group and I was super happy when I spotted one of them was carrying a baby! They move pretty fast so my pictures aren’t great but I tried my best and you can see the baby if you know what you’re looking for. 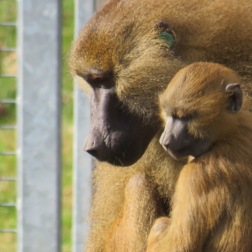 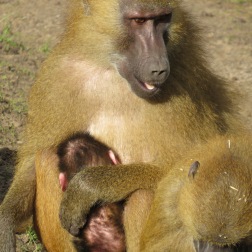 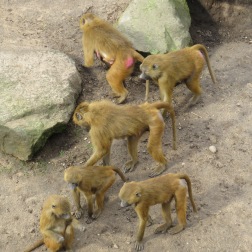 All in all, I was really impressed with the wildlife park. The enclosures were all really big, the animals seemed to mostly just be left to their own devices which I always think is right and actually when you look into the park a bit more they are doing some really good work, rescuing animals from zoos/parks that don’t have good enough facilities anymore, participating in conservation programmes and also breeding but to repopulate in the wild. I really would recommend going. It isn’t a huge park so only takes a few hours, but it was really enjoyable; even with the rain! It was family friendly too, no big hills and plenty of stopping places, young kids were toddling around all over, it really put a smile on my face!

One thought on “Yorkshire Wildlife Park”