I’m back in my home away from home (aka as Houston) and last night I finally went to a restaurant/bar I’ve wanted to go to for ages. It’s up by Baybrook Mall which since I started visiting Houston has become a really cool section of restaurants and bars, so from where my friends live it was pretty close by (by Texas standards).

It was pretty busy when we arrived but we had requested to sit in the bar area for food so we got seated pretty quickly. The whole atmosphere of the place is pretty cool, it’s really dark with trendy modern bare lighting, then behind the bar they have the liquor on shelves with an old fashioned library ladder to access them.

Now this might sound like it was a stupid place to want to go as I really struggled to pick a drink as I don’t really like whiskey. There was a full bar but most of the cocktails etc. were whiskey based. We picked a Hawaiian Christmas from the specials menu but when it came it was gross we had to send it back. Jen settled on some short whiskey cocktail and I went for a Pimms Cup. Again though my cocktail had a bitter and thyme taste which I wasn’t crazy about. 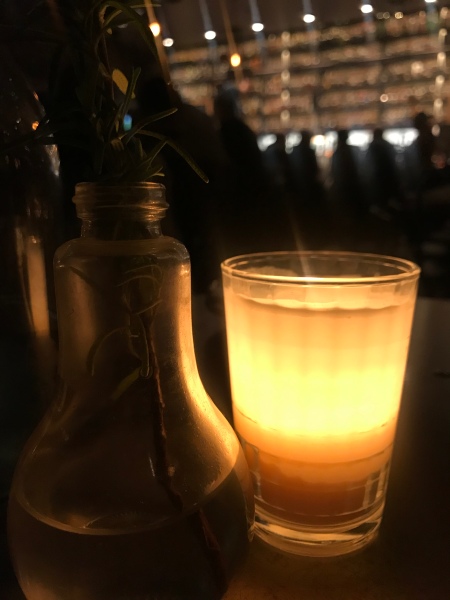 Our food was soooo good though! We had goats cheese fondue to start which came with some amazing bread with oil on, and the cheese was super perfect! I then had steak which was served with a cheesy cous cous risotto which sounded weird but it was soooo good. Jen had chicken that came with our favourite – sprouts! The portions were a good size too, I didn’t feel too full but I managed to eat it all. Perfect!

However, the service was shocking! Jen has been quite a few times and always had good service but last night was ridiculous. At one point I asked if we could have more water, she took the bottle then came back about 20mins later saying ‘what happened to your water?’ Idiot! It then felt as if she was avoiding us as she kept taking the long way round to avoid passing our table and never made eye contact with us. We must have waited about 40mins from the time we decided to get our check to actually being able to ask for it. The table next to us didn’t look happy either!

If really was cool though. I feel like if I went again I’d probably order a mix of appetisers and sides though just so I could try more stuff, and maybe accept defeat on the alcohol front.