Not necessarily appropriate for kids to read!

This is the third year I’ve attended Laffs 4 Kids at Newcastle City Hall. It’s such a good idea! Every year Jason Cook arranges a comedy show of him and some of his friends/contacts in the business, the tickets are £5 and you have to donate a present for Metro Radios Cash for Kids Mission Christmas. It’s such good value, a good laugh AND you do a good deed.

This year saw Britain’s Got Talent star Daliso Chaponda open the show with a cracking joke about the irony of an African man performing in a charity show to raise money for English children. This pretty much set the tone for the night, it’s definitely not for the politically correct. I didn’t see Daliso on BGT but he was actually really funny, I would like to see him again in the future.

Up next was Carl Hutchinson; who unfortunately I will forever think of as Peter from The Lion The Witch and The Wardrobe due to a school performance… I was a mouse… Carl often supports Chris Ramsey when he performs so I’ve seen him quite a few times and actually this was the funniest I have ever seen him.

Steffen Peddie read a poem; I was glad he didn’t do too much because he is definitely not my favourite. Apparently he has recently moved as a DJ to BBC and therefore wasn’t allowed to swear on stage… yeah that failed! The poem was the Geordie Night Before Christmas though and was actually pretty funny (well done Jason Cook who wrote it).

Joby McGeean was next with a funny sketch/song about how people always forget his name. Ironically, I didn’t realise I had seen him before until he was about half way through his routine, then I realised I had seen him at the Stand a few weeks ago. He’s genuinely funny and I really enjoyed his segment.

Chris Ramsey pretty much went on a rant about how his life has been ruined since he had his toddler. Another fellow schoolie I enjoy when Chris cracks local jokes, I also enjoyed that he seemed quite off script and just generally ranting; it’s always annoying when you see the same routines more than once.

Cue Anja Atkinson. I saw her at the Stand the same night I saw Joby McGeean and thought she was genuinely hilarious, but she did the EXACT same script and it just wasn’t as funny second time round. Disappointing as female comedians are always massively underrepresented. I think you have to consider your audience though and doing two charity shows in the same city, there are bound to be people who attended both.

Brennan Reece, Anth Young and Scott Bennett all did a slot too. I found them all funny but I think by this point in the show I needed somebody to really be amazing to blow me away to really make an imprint. Then Adam Rowe came on to finish the stand up for the night. I’ve seen Adam Rowe a few times and always find him funny; his scouse accent definitely helps. And tonight was no disappointment. His impressions of his Mam were definitely the highlight!

Throughout the show there was a number of musical interludes. Some comedy songs from Jason Cook and Glen Roughead (one song about tapping before you come was a highlight), the Laffs4Kids singers did an amazing rendition of my favourite Christmas song ‘A Spaceman Came Travelling,’ and Rosie Ramsey joined Glen on stage for some more serious talented singing.

All in all a great night. And what is more important, 11,820 presents were donated to kids across the North East who wouldn’t get a present on Christmas Day without donations! Honestly, it’s such a good night and worth so much more than you pay/donate. I’ve got my tickets for next year already!! Well done Jason Cook!!! 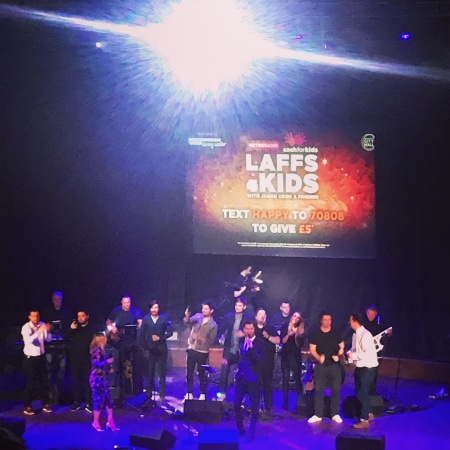