After stealing billions of kroner from Wennerstrom, Lisbeth Salander leaves Sweden and the drama behind and goes for a trip around the world. However, after a year of travelling she decides to go home, buy a new house and have a fresh start.

Following the success of Mikael Blomkvist’s exposé on Wennerstrom, Millennium is approached by a freelancer writer wanting to expose the sex trafficking industry in Sweden; including naming numerous ‘punters.’

When the freelance writer and his academic girlfriend are executed, all fingers point at Salander as a potential murderer. She is off the radar, not contacting anybody, but Blomkvist cannot believe the girl he had an affair with a little over a year ago would be capable of killing two innocent people. Whilst the police carry out an investigation, he and his colleagues at Millennium carry out their own.

I really enjoy that it is one of those books that doesn’t give you the answers. Salander gets accused of murder and her narrative disappears for a while so you don’t know whether she is guilty or not. It also releases information slowly instead of giving you the full story straight away.

Again it’s not a quick read (well at least not for me) but you definitely feel like you’ve achieved something at the end of it!! 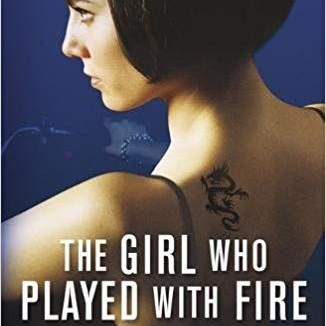