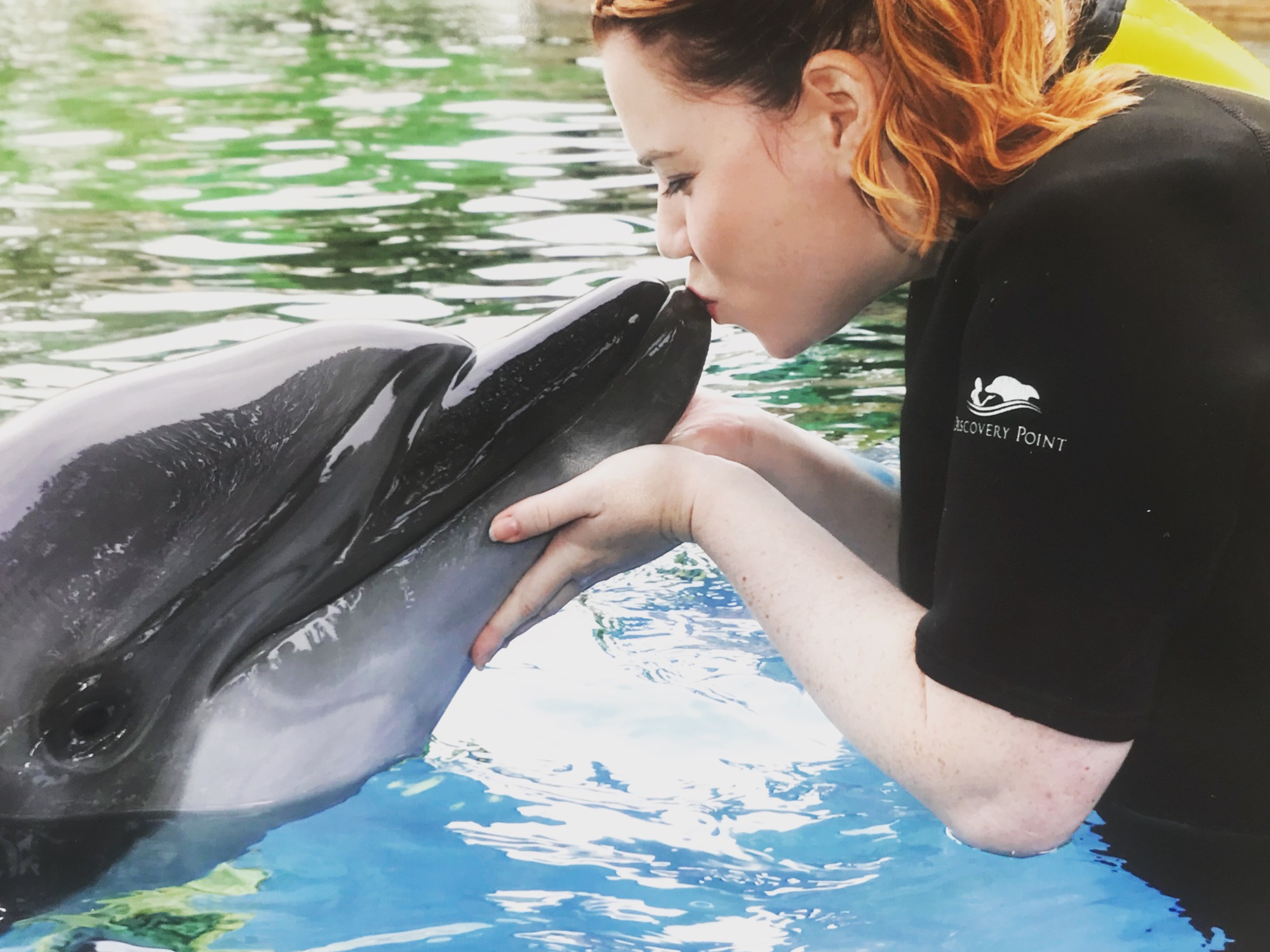 Don’t rain on my parade I don’t want to hear your SeaWorld views this is not a political debate!

Ever since I was about 8 years old, I have wanted to swim with dolphins. I remember watching the S Club 7 tv show Miami 7, and for Hannah’s birthday they took her to swim with the dolphins. I have then been to Orlando three times and every time not been able to go; because nobody would go with me. Therefore, when I booked my September trip to Houston,  I told my friend even if I had to hire a car and go alone, I was going to San Antonio to swim with the dolphins in Seaworld. Luckily, Jen my best friend is amazing and told me she would come with me and we would make a whole weekend trip out of it.

Before we started the 205mile trip we stopped for supplies at Buc-Ee’s; if you’ve never been to Texas you’re missing out, Buc-Ee’s is basically a gas station but it has the best snacks and the cleanest bathrooms! We got crisps/chips, breakfast goodies and drinks. Then on the road we went. We were a little late starting our trip as I managed to get foundation on my dedicated roadtrip shirt and it needed washed… but we made it and all was fine!

I bought us shirts from nastygal.com for our trip. This was mine.

We stayed at the Hilton Garden Inn hotel by the Riverwalk. It was clean, modern and trendy. The room was a really good size, with two queen beds. There was a great black out blind, big TV, fridge and the bathroom was good too. The only real downside was our view…

We headed down to the Riverwalk when we got there to get some drinks and enjoy the weather. First stop was the Iron Cactus. We figured we should get the signature drink so both ordered a cactus juice; a frozen cocktail with torado silver, ever clear, midi and blue curaçao. It was one of those drinks that was yummy for the first few sips, but soon got super acidic and caused me to have heartburn for the rest of the night. 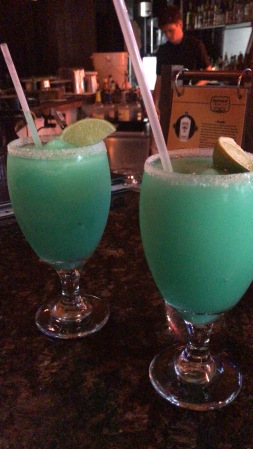 We then stopped at Paesano’s. I kind of wish we had booked to have dinner here as it looked so good, instead, we grabbed a drink each and ordered some spinach dip to get us over to dinner. I made a mistake by ordering a blood orange margarita as the acid was just getting worse! The spinach dip was good, BUT it didn’t really have much spinach in, it was just a cheese dip really; which I am more than happy with!

It was then back to the hotel to get showered and changed for dinner. We had spent hours trawling trip advisor and similar websites before our trip to pick places for dinner. Down on Grayson’s had loads of good reviews so we decided to head over there for dinner on our first night. It was really good (read here for more on it).

Today is the day I’ve been waiting for!!! DOLPHIN SWIM DAY!!!! I was so happy it wasn’t stormy, because for weeks I’ve been checking the weather and dreading it would be stormy and my dolphin swim would get cancelled, but nope! It was dry, slightly chilly and perfect. We started the day with a trip to Starbucks on the way to SeaWorld. I always forget how different the options are for Starbucks in the US opposed to the UK; the bigger breakfast sandwich choice is definitely great.

Then it was on to SeaWorld. I had been told that apparently the BlackFish hate hasn’t effected San Antonio as much as Orlando and that it’s always still super busy so I was not looking forward to the crowd. I don’t know whether it was the expected bad weather, being off-season or a combination of both, but it was amazing the park was practically empty!

We were booked into the 11.30am dolphin swim so had about 30-40mins to spare before we headed to the check in point. We were a little sleepy off our slow morning, so decided to get our blood and adrenaline pumping by riding the Steel Eel rollercoaster. We literally walked straight on and there were only five of us on the entire rollercoaster. I’m an absolute adrenaline junkie and this did not fail to impress. It is fast! I loved it!

It did the job to get us pumped up and we headed over to Discovery Point. Dolphins are my favourite animals so I was so excited when we approached the pool and it was feeding time. I think they are just amazing animals and I was getting super, super excited to get in the pool with them; although also a little bit nervous.

Now let me tell you a secret: wetsuits are NOT attractive! Unless you’re a size 4 you are probably not going to look good in it; they definitely accentuate all of the bits you usually want to hide. So, sitting in the orientation room for like 30mins was not the best. There were only seven of us getting in the pool so it was a good group size. We were then split into a four and a three to work with different dolphins.

We got to meet Sadie who is the biggest dolphin they have in San Antonio at nine feet long and 465lb. She was lovely though! You really don’t get to spend that much time in the pool with the dolphins BUT it was still worth it. It was educational, we got to practice some of the training directions and most importantly got kisses and a chance to experience a dorsal fin swim. There was a photographer in the pool with you too and after the experience was the opportunity to buy some photos. Like all of these sort of things, the pictures were pretty overpriced, and they got all of our bad sides and double chins. However, I bought one picture to remind me of the experience! 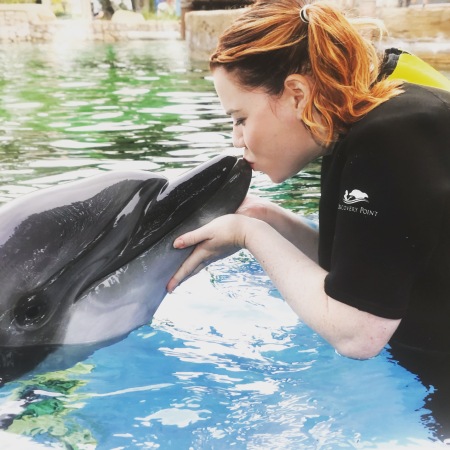 It probably took us about 90minutes all together, including getting changed. But I loved it. I would obviously love the opportunity to swim with dolphins in the wild, but that is such a rare occasion that I am grateful for the chance to appreciate this amazing animals.

As controversial as it is, you can’t go to Seaworld and not watch the shows. Therefore, we fit in the two biggest shows into our afternoon, checked out the penguins and rode the other two big rollercoasters. I’ve never really had the opportunity to see Beluga whales before so seeing them in the Ocean Discovery show; alongside Pacific white sided dolphins, was really interesting. Who knew their heads were so squishy?? I was really concerned about one of the trainers though as she fell down the stairs during the Macaw display. I hope she’s okay!

We also watched both of the Orca shows. As much as I really don’t want to get involved in the Killer Whale in Captivity debate, let me just say, I totally understand the issues attached to keeping these whales in captivity; I’ve watched BlackFish a lot of times, but I cannot help but feel in awe of these magnificent creatures and selfishly enjoy being able to see them. I would absolutely love to see them in the wild one day though! We also checked out the penguins and the sharks in their enclosures. 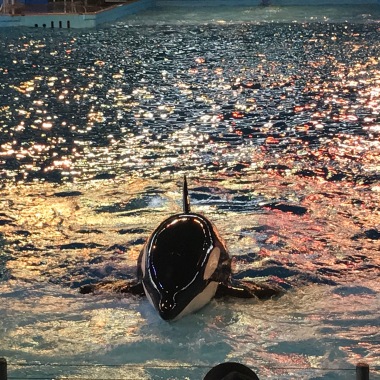 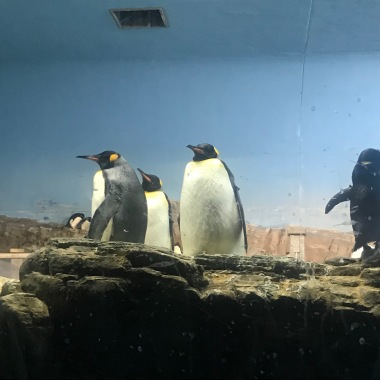 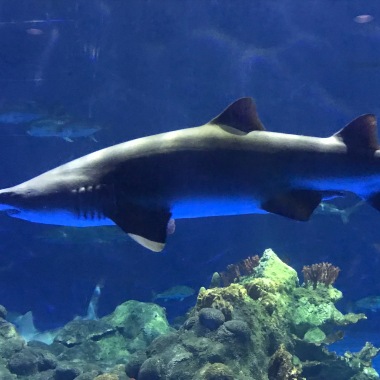 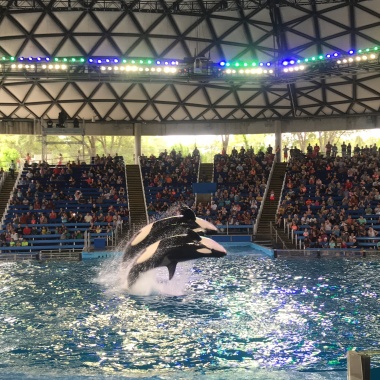 All in all, I really enjoyed my day at SeaWorld and I love hearing about the good things they do manage to do.

We got back to the hotel about 6pm which gave us enough time to shower, chill and get dressed for our evening. We had a reservation at Boudro’s down on the Riverwalk for dinner which I had heard a lot of good things about. I’m glad to report it didn’t disappoint (read more about my meal at Boudro’s here). The RiverWalk was super lively so we went in source of some live music, which we found at On The Bend.

On the Bend had a jazz band playing outside: drums, bass, guitar, trumpet and saxophone, and they were playing so well not only was the bar full but the path by the side of the river was also full of people stopped watching. They were taking requests and even played a song they had never played before. My only criticism would be that they seemed to take a LOT of breaks, and they finished pretty early; I think they were too drunk off the shots a group of guys kept buying them. The drinks were pretty good at On the Bend too and our waiter was really nice. Be warned, they stopped serving food at around 10pm so if you want food head there early. 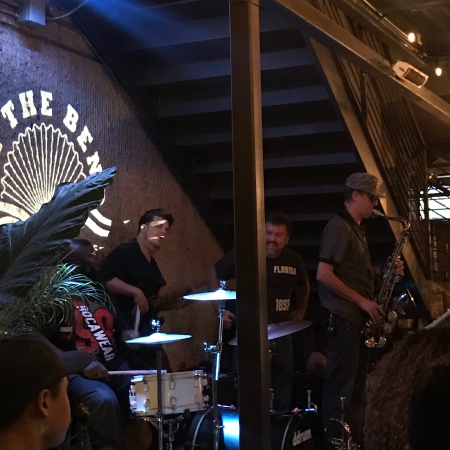 Once the band had finished Jen really wanted to dance so we headed next door to MadDogs the ‘British’ bar. Now let me tell you, as a Brit, this was anything but British. First of all, I knew about 12% of the music played all night because it was all old school RnB; don’t get me wrong the place was bouncing, but I knew none of it. Secondly, the decor, oh dear Lord, the decor. Why do Americans think that you need red phone boxes and union jacks everywhere to make somewhere British?? Haha I would like to think that we’re actually a pretty classy nation! Finally, whoever the kids were on the patio taking shots and shouting ‘Fuck England,’ fuck you! Absolute obnoxious, mortal teenagers. Although, it wasn’t the bar for me, Jen had a great time, up shaking her ass and singing along, so maybe they just need to call it Maddogs and forget about the ‘British’ thing. It was sort of a club without being a club, so if you want somewhere to dance like a ho, this is your place!

Since we had a late night on Saturday we had a lie in on Sunday and a chill morning as we had no plans. We decided to grab some breakfast before hitting the road back to Houston. Just down the street from the hotel was a bakery called La Panaderia which Jen had heard really good things about. It was maybe 10.30am when we got there and there was a line out the door. The pastries were worth the wait though! I’ve never quite got the Mexian Breakfast thing so the cooked food wasn’t my favourite but the Nutella Cruffin was amazing.

It was then Buc-Ee’s and home for us! I had such a good weekend though. Considering it was my third trip to San Antonio I enjoyed it just as much as the first, there’s always something new to discover and most importantly new food! 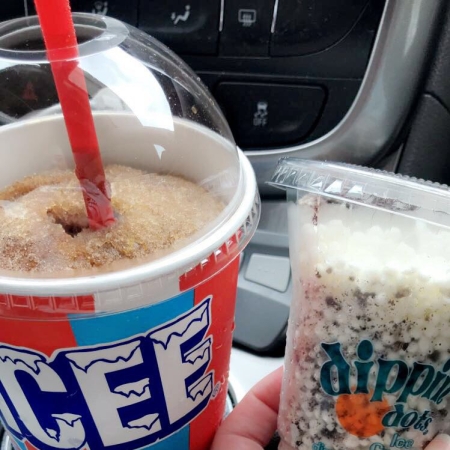