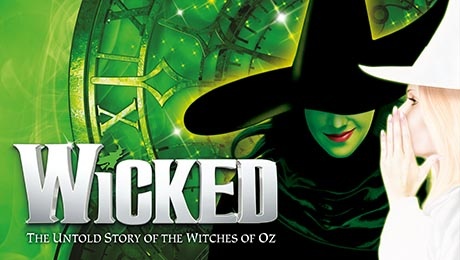 Wicked is my favourite musical, I think I’ve seen it about 8 times. I wasn’t going to go to this round of the tour, however, as the date got nearer I started to get FOMO and didn’t want to miss out. Luckily there were Gallery tickets for just over £20 which made it much easier to persuade myself it was a good idea. BUT, it turns out I bought matinee tickets instead of evening performance tickets; which I only realised when I received an email asking how my visit was whilst I was getting ready. LUCKILY, ATG have amazing customer services and when I called them they told me not to panic and they would sort it out and call me back. They didn’t have any £20 tickets left for me to swap into, BUT they allowed me to upgrade our tickets for the cost difference.

The opening chords of No One Mourns the Wicked get me every time. I get so excited its crazy. A few years ago I was lucky to go on a backstage tour when the tour was in Manchester and it was super interesting, every single production of Wicked around the world has the same costumes and choreography (so I was told) so as the show begins I feel nostalgia for all of the other times I’ve seen the show and also excitement of what’s happening right now.

Although nothing will compare to seeing Idina Menzel play Elphaba, the cast were pretty good in the tour. However, I have one issue with the cast of Wicked every time I see it… Why is Fiyero NEVER as good as the female leads? I don’t think I’ve ever seen a Fiyero I’m that impressed with. Don’t get me wrong, he wasn’t bad but the songs are just so high for guys and they never seem to get the right cast who can hit those notes comfortably.

The show is in Sunderland until the 29th of September, so if you have the chance get tickets because even if you’ve seen it before it never gets old! Plus, if you’ve only seen it once, you will probably find you will discover loads of little things you missed the first time around if you go again! You can book tickets here!