In May I took advantage of some last minute train tickets to London from Virgin Trains East Coast and decided to take my Mam out for the day. I absolutely love London and used to travel down once a month with work, but my Mam hasn’t been that much.

We decided to just walk around and be touristy. Our original plan was to visit the Tower of London as I have never been; however it ended up it was such a nice day we didn’t really want to be indoors. Instead we just walked, walked and walked.

We started at Buckingham Palace – where better to start?

We waited around for ages as it seemed like something was going to happen, the road was closed and there were lots of barriers. However nothing happened… Strange.

From there we walked down the Mall to Horse Guard’s Parade. I’ve probably walked through Horse Guard’s Parade loads of times, however, I don’t think I ever realised that it was such a monumental place that the royals always pass through. I got my typical horse guard photo too.

I’m always amazed how well behaved the horses are, but it must be such a boring job sitting there all day with a serious expression getting pictures taken.

It was then down the street and pass Downing Street and the war memorial, then on to Big Ben, Westminster Abbey and the Houses of Parliament.

I love how iconic the view is. Although I cannot remember a time I’ve ever seen it without scaffolding. It must be pretty devastating for those international tourists who come to see the sights too, especially now Big Ben is covered up.

It was then down onto South Bank on the hunt for somewhere to eat; because it was surprisingly difficult to actually agree somewhere to eat on a warm busy Saturday in London.

We walked for miles. We passed Shakespeare’s Globe theatre, the Shard, Tower Bridge, a cute little church and some cool street artwork. 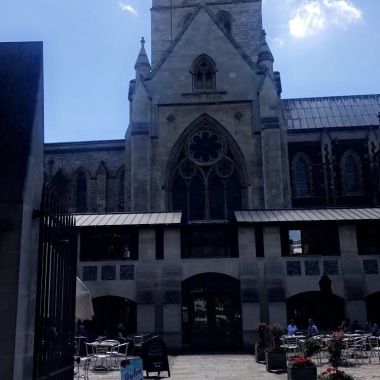 We finally came across an arcade with some restaurants in as I was about to cry from hunger (maybe not quite but it had been one of those walks where nothing we saw was what we fancied). It was called Hays Galleria and we chose to eat in Balls Brothers as they had “outside” seating.

There was a set menu so the options for food were pretty limited, but there was a good enough choice for us. There was also a great offer on wine where you got a carafe with your meal. It was  a while ago now so I can’t remember the exact deal.

Anyway, it was all going great, and then it all fell apart. We wanted 40mins for our main meals, and then when they came they brought my Mam a chicken burger instead of the beef burger she had ordered. I asked them to correct it, which they begrudgingly did, however, it then took a further 25mins for it to arrive and I had finished eating my meal.

We weren’t the only people experiencing bad service either. We witnessed a family get up and walk away after a few bites of their food because they didn’t have time to eat it once it arrived.

They did redeem themselves with the desserts though as they were amazing!

I had psyched myself up earlier in the day to go to Amorino’s ice cream shop; I went to the one in Marbella and it was the most amazing thing ever, not only was the ice cream delicious it was shaped like a flower! However, when I found it I was still stuffed off my lunch. I was honestly devastated I didn’t want it. I did have a quick stop by Cinnabon to take some home though!

All in all, we had a fun day out. Walked lots. Were super lucky with the weather. And it was all thanks to Virgin East Coast’s cheap last minute tickets as we would NEVER think of having a day out in London otherwise!