At the start of the year I decided to get my Mam a National Trust membership for Mother’s Day on the premise that it was a great way to spend our days off; plus the price for the year is pretty much just a couple of trips to some of the more expensive places and it’s equal.

I had previously been to Cragside two years ago (read about it here) but other than that had never really experienced much of the National Trust; I just knew I thought the lake district was pretty and I should probably enjoy the countryside more…

I went to Wallington with my Mam back in April. It’s in Northumberland so obviously is beautiful. I wasn’t overly impressed with the house; it is no Cragside, it would’ve been cool to live in it don’t get me wrong, and there’s a cool balcony all around the upstairs. But I wasn’t interested at all in the artefacts that were on display; in one room there were a lot of shells… But the grounds were beautiful.

It was a pretty brisk day, but it was Easter weekend so there were egg hunts and things going on. There were some pretty cool play areas for the kids too, one of them was shaped like a train and you could play in the ticket office (I was genuinely jealous there were children playing so I couldn’t. We decided to walk down by the stream/river thing. 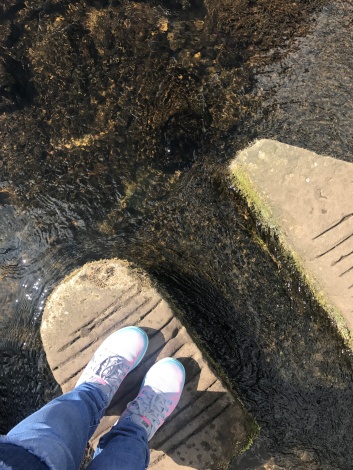 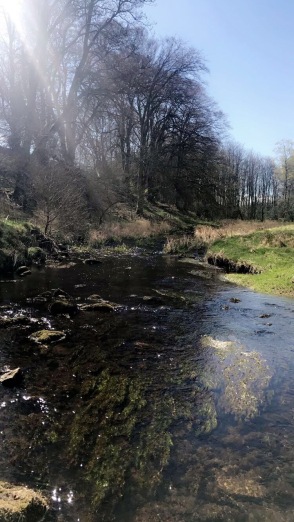 I was super happy because they had stepping stones across. I love stepping stones, I’m not even sure why but they remind me of being little and thinking I had to jump really far to get inbetween them.

There were greenhouses and gardens full of flowers too. Although it was still spring it was lovely and colourful which made it feel more summery.

It didn’t take that long to walk around the grounds so I would say unless you’re with children who want to play on the lawn and in the playgrounds and stuff it’s more of a half day sort of place. We decided to have some lunch in the cafe before we left and had a lovely baked potato. It was typical options though and it was definitely overpriced but hey ho! YOLO.

We had a 2nd visit to Cragside in May as a family day out. There was me, my Mam, my big sister Michelle and her boyfriend Dan. Cragside is like ‘the one’ for the national trust locally. It’s beautiful and has so much history.

It centres around this amazing Victorian house which was the first house to ever be lit by hydroelectricity (little fun fact for you).

But the grounds are just beautiful and huge. You can quite literally walk for absolutely hours. Behind the house is a big hill (as you can see the house is set into the side of it), and when you go over the other side of the hill there is a maze…

Thats a picture of me posing in one of the entrances right there (repping for the Houston Rockets obv.)

There are also two big ponds? lakes? I’m not sure what the official title is but they’re big and so calm the water always looks like a mirror. There are a few ducks on the pond too which usually hide amongst the reeds. It’s just really picturesque. 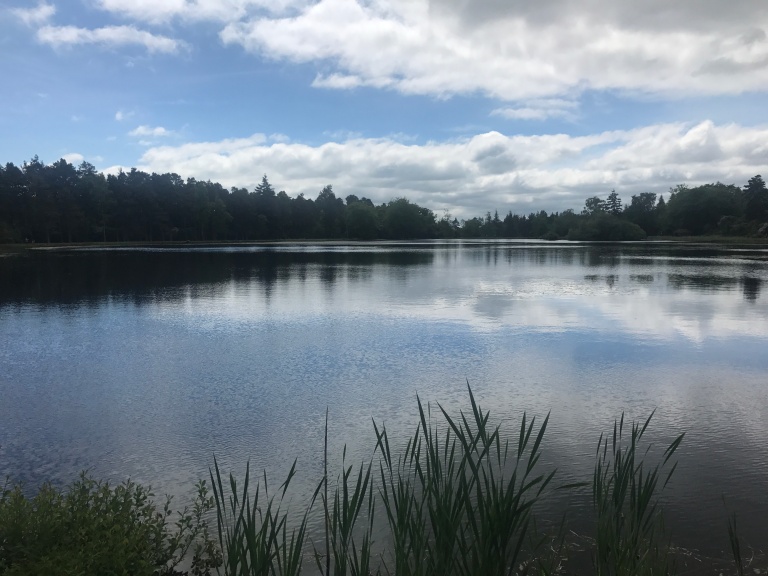 You could literally spend hours at Cragside.

We stopped by the visitor centre for food too. You can sit outside in the courtyard which is always nice. And there’s an ice cream van which usually parks up on the lake side of the property in a small car park there (I think its near a play park).

If you’re an exercise geeks there’s a ‘trim trail’ too with static exercise equipment scattered around the property.

It’s almost a rule too, that once you’re done for the day and you head back to your car. You have to do the drive around the property before you go to appreciate one last time how pretty it is.

Roseberry Topping is a strange little mountain/hill just outside of Middlesbrough. When I went to Teesside University I can remember seeing it in the distance and thinking it looked really strange. It’s not somewhere I would have ever really thought about going, but, in the National Trust magazine I saw that they were hosting a coffee morning on the top so thought hey ho let’s go!

I don’t think I was fully prepared for how steep the whole climb was. This picture was taken from the top of the first section which is just a short forest-y walk. Now I know I’m super unfit but woah my legs hurt!

It started as a niece day too, however it didn’t last for long. By the time we got to the top and got our drinks and cake it was freezing, damp and windy!

The view was great from though from the top. I also felt like getting cake made my personal achievement feel appreciated! I’m not sure I would’ve been as happy getting to the top and not having cake waiting.

Roseberry Topping, although a National Trust site, is free to access. We found it very complicated to follow the set trails though and ended up pretty much wandering through a farmer’s property (literally down past his tractors and stuff). So unless you’re map savvy (clearly we aren’t) it might be better to stick to the more obvious trails.

We also managed to find a broken gate which was really difficult to open (I actually made my Mam climb over it hehe). It was definitely a different day out that a usual National Trust site but it was nice to experience. Not sure we will go back in a hurry though. It’s also only somewhere you could go for a few hours.

Gibside is in such a strange location. It is literally the opposite side of the A1 to the Metro Centre! Yet the two places are worlds apart. What I really liked about Gibside was that to get into the park you had to walk over a really cool wooden walkway which I just really liked, I’m not really sure why. You then come into a gravel courtyard which has your typical little cafe. Now I don’t know about you, but on a Sunday morning you definitely need a cup of tea and a cake before you can even start walking!

After the disaster of following the trail in Roseberry Topping, we thought we would give ourselves another chance to prove we could do it. We picked the pink trail… obviously. My Mam had been before with my sister and told me that it was quite a casual walk and I didn’t need my proper trainers on or anything. So, I put on my oversized men’s Harry Potter t-shirt I had fashioned into a dress, converse, earrings and everything. We ended up full on hiking!

It started by taking us through the gardens and passed a lovely orangery building.

We were pretty jealous of the sunflowers because ours definitely weren’t that big! The garden had some really cool deckchairs in it too for people to relax which was nice. I really liked the orangery building and couldn’t help myself thinking… maybe one day, if I ever get married, I could have some pictures taken there in my wedding dress… maybe… one day… lol.

We then followed the trail up and around the grounds. We came across another court yard which I think used to be the stables. There was a really cool little second hand/charity book shop that I enjoyed having a nose around. Then, onwards and upwards. Turns out, if you pick the pink trail, you have to prepare to end up in fields of sheep and paths which don’t feel like they are even part of the Gibside grounds.

We did see some red kite’s which the area is apparently famous for; I saw we saw them, we were really excited spotting them miles above us, then when we went back to the car one was circling for ages haha. The trail finally descended and took us along a lovely little stream.

Our trail ended near a little chapel, which was really beautiful outside but inside it was; in my opinion, a little bit creepy. 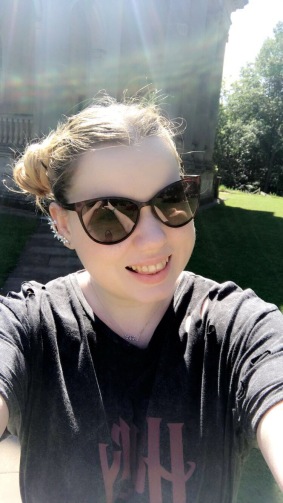 It was a lovely day out. I imagine the different trails give you a totally different experience too so I can’t wait to go back and try a different one.

Fountains Abbey was the one National Trust place that everybody I spoke to recommended going. It’s a little bit further than all of the other places I’ve visited as it’s in York, so, we decided to make a day of it for my Mam’s birthday. We packed up a picnic and off we went for the day.

It has a very modern visitors centre that you go through as you enter. As per tradition we walked round and down to the tea rooms to start with. I must say the Cadbury’s powder hot chocolate was not fantastic, and everything was super over priced, but when you have a captive market I suppose you can.

The walk around the grounds is absolutely lovely. We went down by the river first. 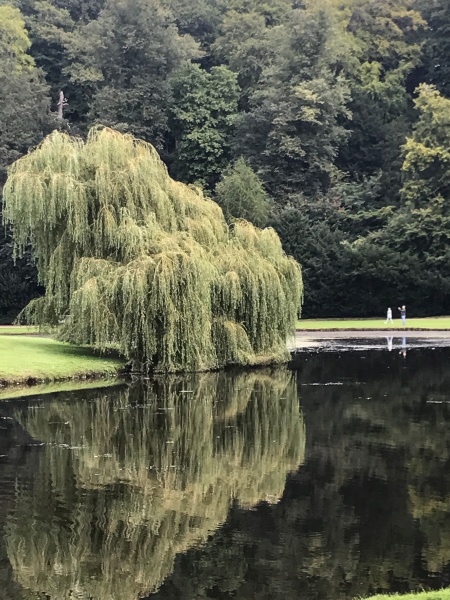 We then walked up and over the view points. There were a few little monuments along the top too which were cute. 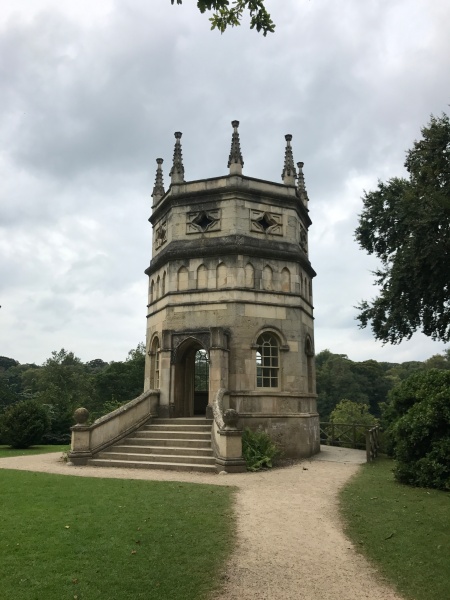 This was one of my favourites I felt like it was a little kids play castle. So random! It had a tunnel that travelled underneath it too and came back out further down the hill; I only discovered it by being really brave by iPhone light as I walked into the dark!

We then headed down by the fountains. I’ve heard that in the summer it’s a lovely area to have a picnic but it was a little brisk and open spaces were not our friends.

Next door to Fountains Abbey is a deer park which we decided to take a walk through whilst we were there. I was super excited when I first spotted some deer in the distance and felt like I had to be really quiet (even though they were miles away), I felt like I had found Bambi.

However, when we walked further around, we found some more deer who were so close to the path and totally unfazed by the human presence. I find their antlers so majestic and surreal. I don’t know why.

We then headed back into the park to walk back around to the ruins of the actual Abbey.

The ruins are really pretty. It’s pretty amazing how much is still standing too. Although also a little sad it hasn’t survived. 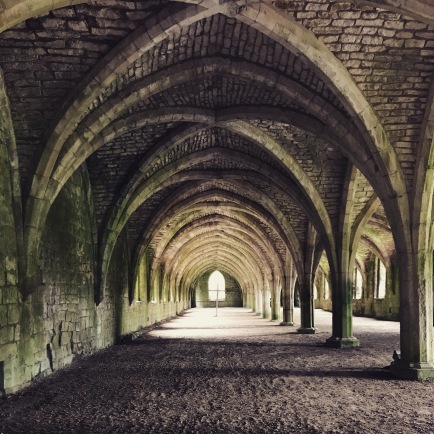 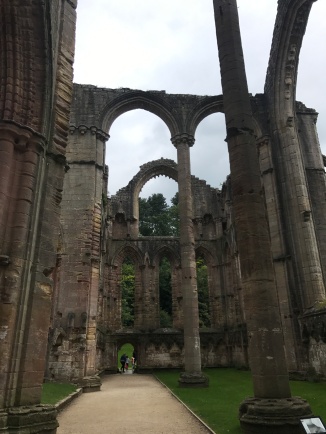 In true National Trust style the playground looked so much fun, I was jealous I’m not a child; although I saw some parents having just as much fun pushing the kids too high.

Fountain’s Abbey definitely is worth the trip. There was lots to see and do: material looms to thatch, fancy dress costumes and trails to follow etc.

There are quite a lot of National Trust places close by. However, I’m definitely most interested in those which cost to enter. Hopefully this weekend; weather dependent, I will get to go to Washington Old Hall.

There’s just something nice about getting out of the house for a walk somewhere that is interesting to look at, but also not overwhelmed with people.

My membership was definitely a good purchase!