I’ve always been a fan of a political suspense film; my eyes were glued to the screen when I watched Zero Dark Thirty. So when I saw a trailer online for Eye In The Sky it seemed right up my street.

The film focuses on a British military mission in Nairobi and the decision making processes involved in authorising a strike. It begins as a straight forward mission to detain 2 of the most wanted people in Africa, but quickly spirals out of control.

Helen Mirren plays the driving force of the kernel who’s directing the mission and pushing forward for action, whilst Alan Rickman (in what I believe is his final role) plays the general who has the job of liasing with the political and legal powers that be.

Meanwhile it is actually Americans who are piloting the drone which features as the ‘eye in the sky.’ I really don’t want to give too much away because it is a very simplistic storyline with such brilliant suspense and filled with moral dilemmas where you can genuinely understand both points of view.

I was grasped from the start (even though we were surrounded by imbeciles who couldn’t understand the idea of being quiet in the cinema) and felt like the film was genuinely real; which I assume it is a true reflection of decisions made every day by our government and military. I can’t recommend it enough, especially if like me you enjoyed Zero Dark Thirty as it’s sort of a British fictional version. Plus Helen Mirren isn’t even that annoying!! I feel like I should have so much more to say but all I can think is that everybody should watch it. 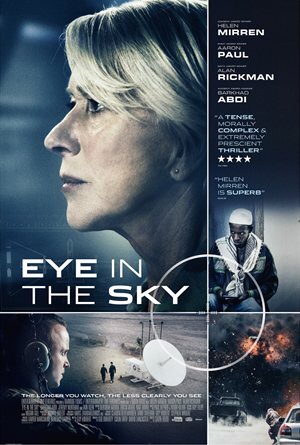