🎶Deep in the valley, lightwater valley 🎶 everybody remembers that jingle right?

Well I haven’t actually been to Lightwater Valley for years, but after a couple of difficult weeks I thought me & my big sister deserved a fun day out, and what better way than a roadtrip to a theme park?!? So on Sunday we headed down to Yorkshire for some fun.

However, the day did not start off as planned. As per usual Michelle (my big sister) wasn’t ready at the scheduled time of pick up; now anybody that knows me should know I’m a control freak and this really annoys me but she never learns. We then hit obstacle number 2 when we got to the petrol station and the petrol cap wouldn’t open on my car (I really need to take a trip to Audi to get them to look at it) and step-daddy Colin had to come to the rescue.

However once we were on our way of all seemed plain sailing… Until we hit obstacle number 3 the A1 50mph roadworks – what a pain!

So about 45minutes later than planned we got to Lightwater Valley to start enjoying some fun!

Not much has changed since I last went (about 5/6 years ago) except there’s 2 or 3 new rides. Like all wizened theme park goers we headed straight to the back of the park for the biggest rollercoaster ‘The Ultimate.’ I can honestly say I forgot how good the Ultimate is, it is 1.5miles of fantastic; don’t get me wrong parts of it really hurt, the second drop is just brilliant and the tunnels brought me back to my childhood.

Those were our best rollercoaster faces!

Next up was Raptor Attack (previously known as the Sewer Rat), an underground dark roller coasters. It has been rebranded to a story about an abandoned mine shaft which has somehow been overtaken by dinosaurs… I’m not 100% of the story, however I loved that it mentioned on the audio in the queue that it had once been infected with rats. It is one of those rides where you scream because it’s dark and unexpected but not actually all that thrilling.

The third and final ‘grown-up’ rollercoaster is the waltza style coaster that all good theme parks seem to have – aptly named The Twister. It also marked the 1st spinning ride of the day which we soon discovered Lightwater Valley is in no shortage of. 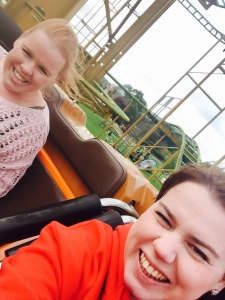 We then headed to Michelle’s favourite ride – the Pirate Ship. Personally, I find pirate ships boring after a few minutes but Michelle absolutely loves them; if you’ve never done the thing where you stand up as you reach the top I recommend it because it makes it so much more fun. However, the pirate ship did provide some perspective to spot the next thrill of the day – Powder Kegs. Mark spinning ride no.2 and the beginning of feeling sick, however I loved this ride! It spins all over the place haha really amazing. There was a guy opposite us who must’ve been the child’s grandad who was totally trying his best to hold it together but you just cannot help but smile like an idiot. This is a relatively new ride (i.e it wasnt’ here last time I came) and I can honestly say – Good investment Lightwater Valley!

Our plan was to go straight onto the ‘extreme’ pirate ship The Black Pearl which swings right over next, however neither of our stomachs felt like we could take it so instead we thought we would go for a nice walk and decide what to do for lunch. We headed back to the entrance where the fast swings are; if you have ever went on a group trip to Lightwater Valley you will know that the fast swings are the last calling point where you get off run back round and get back on making the most out of your last free minutes before having to get back on the bus. BUT I don’t know how people do it, after going round once I thought I was literally going to vomit all over! 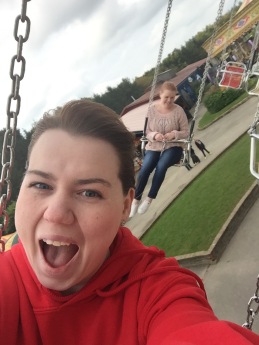 If they ever got rid of the fast swings though I would be so sad!

My stomach requiring something a little bit gentler we headed over to the Lighwater Valley Wheel, because it was a ‘quiet’ day they were only using 3 of the carriages on the wheel and going round once which was pretty frustrating, then our little pod wasn’t even locked until we started moving away. Bit of a waste of our time to be honest but we decided on naughty food for lunch whilst on it!

We were both expecting to have quite a short day due to the park being quite small so after dinner (and a further 2 rides on the ultimate) we decided to just tick off the rides we hadn’t done yet. Starting with The Black Widow’s Web

I always remember this as being the really scary ride that we went on when we were younger but it turns out it is just hilariously funny.

However, make sure you go on with somebody you’re comfortable to crush otherwise that could be awkward…

Still feeling a little bit too sensitive to face The Black Pearl, I was going to hit the Falls of Terror, but apparently you can only ride in 2s and Michelle doesn’t like things like that so unfortunately I missed out on that. So we chose to finish the day on the Eagles Claw, which was really fun until it became the longest ride ever and once again the sickness kicked in. I don’t know how I managed it when I was younger!

I had a great day out, however, my only negative is with the staff. They are all very young and particularly those in the restaurants and food kiosks just do not have the right attitude in my opinion; at one point we queued 10 minutes for pancakes to be told she had ran out of brownie sauce and had nutella but it was frozen so she didn’t want to make them… first of all I didn’t really want to know they freeze their nutella, second of all I had waited 10 minutes I feel like she could’ve notified the queue in advance. And another incident in the Hungry Harbour where a young girl spilt a hot chocolate and no members of staff came to help clean it up the parents had to find cleaning equipment themselves because when they reported it nobody was concerned.